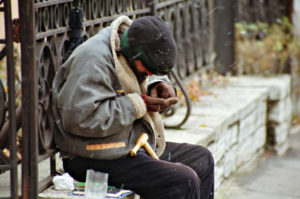 ..continued from Part One – Joe Vitale shares how he went from homelessness to infinite abundance and a life of giving back to help others.

So here’s the story…

I knew I wanted to be an author when I was a teenager. I wanted to write books and plays that made people happy. Everywhere I looked I saw un-happy people. I believed I could help them with humor and stories.

During that time of the mid-1970s, I watched sports. I don’t today but back then the Dallas Cowboys were the rage. Roger Staubach and Tom Landry were heroes. I got caught up in the excitement and felt the place for me to make my name was in Dallas, Texas.

I lived in Ohio at the time. Born and raised there. I worked on the railroad as a trackman, doing heavy labor all day long, working weekends and summers since the age of five.

I saved my money, packed up my bag, and took a bus to Dallas. It took three days to get there.

I was lost in the big city, of course. Being born in a small town in Ohio didn’t prep me for the hustle and bustle of a city the size of Dallas.

Before long, I wanted out.

But I still wanted to be an author.

At that time major companies were building oil and gas pipelines in Alaska and the Middle East, and offering to pay big bucks if you were willing to go to either place.

I wasn’t keen on going to a foreign country and doing more labor, but I saw a chance to make money, save it, and then go on a sabbatical where I could write for a few months or even a year.

I answered one of the newspaper ads that promised to get me pipeline work at a extraordinary hourly wage. I went in their office, met an upbeat sales person, and ended up giving him all of my money – my entire savings, about a thousand dollars at the time – based on his promise that I’d have overseas pipeline work in a week or two.

You might guess part of what happened next – but you won’t guess all of it.

Within a week or so, the company that took all of my money went out of business.

Their doors were closed, no one answered the phone, and no forwarding addresses could be found.

Shortly after that, the company went bankrupt.

And not long after that, the owner of the company committed suicide.

There was no one left to try to get my money back.

I was in Dallas, far from home.

I confess that my ego got in the way here. My family back in Ohio would have taken me back in and welcomed me back home. But I was head strong and determined to somehow survive.

Well, I did survive – by sleeping in church pews, on the steps of a post office, in a bus station.

It wasn’t an easy time, as you can imagine, and I never used to talk about it. It was too embarrassing.

When I told this story at dinner, everyone agreed I had to share it with you.

They said that people are finding themselves in the same situation – they trusted a government, or a corporation, or a person, or a bank, and now they are losing their homes and their jobs.

….read the end of the story in Part Three – how Joe Vitale changed from being homeless to living a life of wealth, ease, happiness and an inner drive to help others.

NOTE: Joe Vitale is a best-selling author of too many to count books, and one of over 20 guest experts featured in the transformational movie Beyond Belief – produced by Jim Holzknecht and Becky Hays

See the Movie:  Beyond Belief Movie