Well, it’s a very personal thing.  We interviewed for a book called Success Built to Last, three or four hundred of the most successful people in the world.  Of course we did the requisite billionaires, people like Gates, Barford, Jobs, Sir Richard Branson, and people who you might not have heard of who were changing the world.  And people you would have heard of, people like Maya Angelou, and Desmond TuTu and the Dalai Lama. 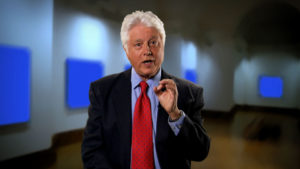 What we wanted to do was find out what they had in common, and the first thing we noticed is that they all had a very personal definition of success.

If you look success up in the dictionary it starts out ok.  It says the achievement of goals, and that’s good, and then it goes on to say especially conspicuous attainment of fame, wealth and power.  And we found the world’s most successful people never chased after that.  They chased after getting really good at doing something that really mattered to them, and that was the secret.  That’s how they defined success.

We asked these people, how do they find out what it was that mattered to them, and they had various stories about it, but most of them said when they were a little child, there was something that always peaked their curiosity that they wanted to pursue, or they were infatuated about, and it wouldn’t go away.

Sometimes they went on to do what their mother wanted them to do or their father, and this little voice deep inside them would keep whispering to them in the middle of the night, demanding attention, and when they started paying attention to it, and investing time in it, that was how they found what it was that mattered to them.

So I noticed these people, when we talked to them, they got very excited about the mistakes they made, and they make more mistakes than the rest of us.  It’s amazing, if you just listen to them talk about their mistakes, you’d think they were losers.  But here’s the key: They never used their mistakes as a reason to distrust themselves.

That was a big one for me.  Because, you look back at your own life, I’m sure you’ll find if you go to do something you’ll find a little voice that’s nattering away telling you about all the times you did something that didn’t work before, and we don’t’ realize that people like Charles Schwab went broke six times before he succeeded in a Schwab.com.

You look at people like Sir Richard Branson huge string of failures, and Michael Dell told us that the beginning of Dell, was one experiment after another, most of which didn’t work.  But they persevered, and they succeeded, because they quickly learned a mistake was a mistake.  Then they looked what there was to learn from it, and they went on with the next thing.

So a lot of experiments, and then never saw a failure as a reason to distrust themselves.  Big idea!!

This idea of finding your life’s purpose is a very popular topic these days.  Curiously, the people we spoke to, didn’t talk about that so much.  They talked about finding what it was that mattered to them, what it was that had meaning to them.  They kind of thought of meaning as something they invested in an activity or a process or a pursuit that they were passionate about.

So the first thing you gotta be passionate about looking outwards into the world.  You gotta be willing to be excited, to throw away the shackles as it were.  Find out what lights your light as they say.

And then the other step to it is, to get good at it.

Well first you do have to love it, because when you set out to get good at something, if you don’t love it you won’t get thru the tough times.  It’s the love, it’s the passion that keeps you going.