The other thing about NLP it says there are different levels, lets call it programming.  That is, to have a behavior, there is an inner mental map, a cognitive program that sort of guides that behavior.  Behind that cognitive map are beliefs and values which are different than, let’s say, our idea about what we want.  They are more the motivation, the permission, and then behind that is our sense of identity. 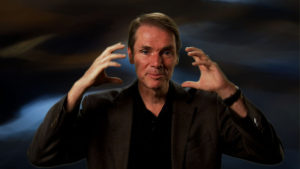 So if I say I want something, there is an “I” who wants it, and behind that “I” that’s where you get to that sense of a purpose, of belonging to something that is beyond yourself, that is bigger than yourself.  This is where you get a sense of some kind of deeper vision of purpose.

People who are able to achieve things they want in their life most effectively are people who are aligned in that way:  their identity is aligned with their higher purpose, then their beliefs fit with that identity and that is connected with their capabilities which lead to their behavior.

When you are aligned, when your identity and your beliefs and your capability are aligned, we called that being in the zone.  A lot of NLP is about coaching what you might call the inner game.  Every athlete, every performer knows that you have an outer game, which is what you are doing, what the physical activity is.

And there’s the mental game, which has to do with your mental attitude and your emotional attitude.  So when those things are aligned, the athlete would say you are in the zone and a performer you would say you have presence. So when you have that sense of confidence, the zone is what we call being in a state of effortless excellence, of flow.

The idea of neuro-linguistics is you’ve got language and the nervous system.  A positive affirmation is the linguistic part of the belief, but it is not the “neuro” part.  To actually bring in an empowering belief, you are going to be doing more than just saying it in the mind.  That’s the verbal part, the idea of the belief.

In NLP we say you’ve got to get beyond the idea. to get it in the muscle.  The way you are going to do that is by adding in information from the other senses and also using the body, your physical attitude, you are aligning again the words with your inner images, your memories and your physiology.

In NLP coaching we do a number of things.  The first is to help people get IN the zone and the second is to find out what gets in the way of being in the zone and how to transform that.  One of the ways that we’re going to coach people to get into the zone, it starts by coming present in the body, to come into the body.  In fact, we say the body is always in the present, to bring the mind and the body into the same place.

Robert Dilts, co-creator of NLP,  is one of over 20 transformational leaders appearing in the film Beyond Belief – produced by Jim Holzknecht and Becky Hays