I think that people have a lot of mythology around artists, they think that real artists are born knowing they are artists, and they are fearless and they pursue their craft w/out any thought of criticism.  In fact, the truth is, quote real artists are people who have learned to live with their fears and make their art anyway. 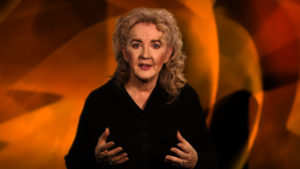 So if people come to me hoping to be taught to be fearless, I say I can’t really teach you that, but I can teach you to live with your fears, and when they start living with their fears, and becoming more intimate with themselves they begin to get just the smallest glimmering of, “Hey it might be fun to try this, or I’d like to try that”  and that’s the little tell tale whisp of creativity that people learn to listen for more and more clearly.

I think we come from a culture which demonizes creativity.  We have a belief system that says artists are broke, artists are crazy/  We have a lot of confusion with alcoholism and creativity, because many of our finest artists were also alcoholic, and so we think in order to be an artist I have to be a down and out alcoholic, and we hold these beliefs as a sort of club over our head, and we say if you try creativity you’re going to really rock the boat.  What I tell people is, well maybe you’re going to rock the cradle and not the boat.  Maybe it’s a much more gentle process than you believe it is.

As people start working, I have them do a tool called shadow artists.  I have them take a look and see in what ways they have been batteries for someone else’s creativity, someone who is officially creative, and very often we find that people surround themselves with other people, or a significant other, who they say their dreams are more important and they are more talented.  So what we start to do with morning pages is say your dreams matter, you are talented, try gently to do just a little bit today.  As people do this they begin to experience an alternative to their negative belief system

That inner voice isn’t the truth, and I have people do an exercise where I ask them to write out the reason I can’t be a brilliant and prolific creative artist is…??  ..and they will find that they have lots of irrational thoughts related to being an artist.

When people start to connect to themselves they can be lead in many different directions.  One of the things I find kind of sad, is how thorough our brainwashing is around money, and how deeply we tend to believe if we work our creativity we’ll be broke.

Julia Cameron is one of over 20 transformational leaders and teachers appearing in the movie Beyond Belief, produced by Becky Hays and Jim Holzknecht.