continued from part one… 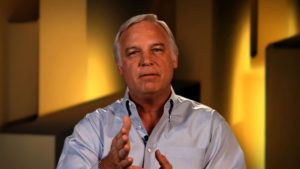 There are a lot of things that stop people from manifesting what they want in their life. The first thing is, most people are not clear about what they want.  They’ve never made a decision.  You know, I teach that you should make a list of 101 goals that you want to achieve before you die.

I have a friend John Goddard who made list at the age of 15, made a list of 127 goals that he wanted to achieve.  He’s now in his 70s and has achieved 115 of them. in his 70s he just finished polo lessons. This guy is the real Indiana Jones.  He’s lived a very intriguing life, gone up every river in the, world, climbed to the top of a pyramid, read the entire Britannica Encyclopedia cover to cover.  He started out very quickly, he said I don’t want to grow up like all my parents friends, sit around the table and say, God wish I had, wish I’d taken off time to go to Europe before college etc.  He said, “I want to be able to grow up and say I did it.”

So clarity is really important.  Get a set of goals.  Be real clear what you want.

The other thing is to trust what you’re attracted to.  Trust the images and desires and preferences that you have and be willing to pursue those.

If you don’t have clarity then what happens is you’re going to be pulled off by other people’s goals. I always say people without goals end up working for other people who have them. So you want to have a vision for your life, and then allow that vision and those goals to guide you, and you want to come back to those on a regular basis.  I review my goals at least everyday by looking at my vision board, my affirmations, my goal list, and I sit with my family at least quarterly to review what we’re doing. So you gotta have clarity.

Another thing that happens for people that gets in their way, is they have fear.  They’re afraid if they achieve a certain thing then something will happen, like if I have a lot of money then I won’t be able to trust my friends.  They are afraid of rejection.  I always teach people that rejection is a myth.  If I ask you to have dinner with me tonight and you say no, the world would say ooh, Jack got rejected.  What I say is that I didn’t have anyone to eat dinner with before I asked you. I don’t have anyone to eat dinner with now.  My life didn’t get worse.

Doubts. Doubts are really killer.  Here’s why.  Many of you have seen the Bose noise reduction headphones, I think Panasonic has them now.  There are many brands.  How do they work?  You put them on your ears, on an airplane, and babies are crying 5 rows away, but you stop hearing it.  The jet noise outside, you stop hearing it.   Why is that?

Well, the sound is coming in as a waveform, and then the Bose system hears that sound and creates an opposite waveform.  And these two waveforms collapse each other into a flat line.  So when you send an intention out into the world, remember it’s a frequency and a waveform.  Then what happens is when you have doubts it’s the opposite of that intention, it collapses it.  That frequency loses any energy to go out and to attract to you what it is you want.

It would be like calling up a pizza company and saying, “Hi I want an anchovy pizza with cheese and tomatoes and mushrooms and onions and whatever”, and then you call them back 5 minutes later and you go, “Hi are you working on my pizza, are you really going to deliver my pizza, are you sure?”

Well if you did that 5 or 6 times you’d be on their caller ID list and they’d stop taking your order. It kind of works the same way in the universe.  So you have to have a positive belief and trust, and faith it will happen.  Faith is basically belief based on things unseen. You just have to make a declaration. “ This is what I’m going to do.”

The other thing that stops people from achieving and manifesting their vision is that they don’t take action, an important part of belief.  See I teach you have to ask, believe that it’s possible, release it to the universe, and then have a vibrational match to receive that which you want.  So part of belief is taking action.

In other words if I was running a seminar and I said I can teach you to levitate and charged $2000 and we’ll do one tonight and you could show up, how many of you would really sign up?  Chances are you wouldn’t.  Why not?  Because you don’t believe that it’s possible to levitate.  And if you don’t believe its possible you won’t take the action necessary to do it.

So basically, action is a statement that I believe, because I wouldn’t expend energy if it wasn’t something I believed in.

So we have a lot of things that we want, but we’re not taking action.  And what I think is critical once you start applying the law of attraction, you start intending what you want and working toward it, what happens is you are going to start having impulses, spiritual intuitions, inner guidance that says you should do this thing.  You know it could be as simple as gee I ought to pull off the freeway and go to Starbucks here and get a cup of coffee.  For all you know, if you follow that intuition, you just avoided an accident up the freeway.  Or maybe you went around a traffic jam.  You have to trust that there’s something greater called spirit, god, source, infinite intelligence, the quantum field, that knows more than you do about how to get you what you want.

So once I make that commitment and I get an impulse to act I need to act on it.

Another thing that’s critical to manifesting that most people don’t do, is they don’t persevere.  There’s going to be rejection. There are going to be blockages.  There are going to be difficulties and mini-failures along the way.  When we did Chicken Soup for the Soul we went to New York to sell that book.  Rejected by all 22 publishers the two or three days we were there, we then went to the Book Expo America and were turned down by another 120 publishers.  Now if we had given up after 100 and said, well this was not supposed to happen, I probably wouldn’t be sitting here today because no one would know who I am.  But the reality is, we went 144 rejections before we got a yes. And so perseverance is critical

And now that book series has over 100, whoa, over 200 titles that we are up to and 115 million copies in print in 47 languages.  So perseverance is important

Jack Canfield is one of over 20 transformational leaders appearing in the film Beyond Belief, produced by Jim Holzknecht and Becky Hays